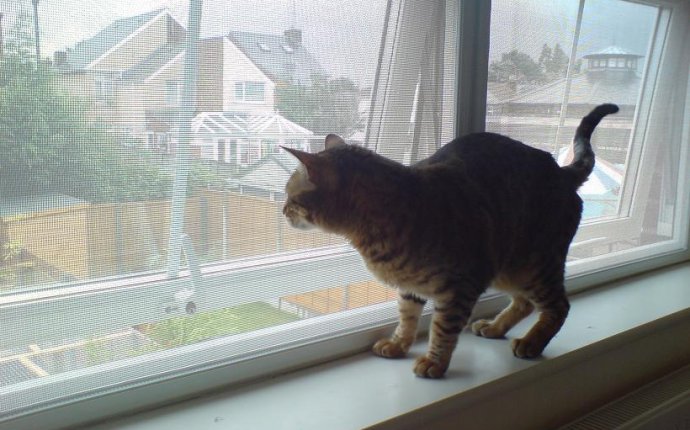 There are several reward and deterrence techniques to help train cats.

Cats scratch for many reasons, including marking their territory, for stress relief and for exercise. It’s an important part of their lives and contributes to good behavioral health. Often they target window screens because the metal in them also helps sharpen their nails, and they can climb them while viewing the outside world. Cats, and especially kittens, are just like children with a keenly inquisitive nature. Unfortunately, your feisty little feline friend can damage the screens or possibly fall off and hurt themselves, so it’s best to teach them to stay off of the screens.

Watch your cat for a few days and observe when it climbs onto or scratches at the screens. Notice whether it’s after eating, when someone or another animal is in the yard, or after a stressful occurrence. The cause of the scratching and climbing is important for choosing the best solution.

Teach the cat to scratch elsewhere if there seems to be no noticeable trigger for the activity. It’s possible that the cat just enjoys scratching on the vertical surface. In that case, place a scratching post directly under the window where the cat scratches most. If at first the cat doesn’t scratch the post, rub it with catnip or catnip oil. Most cats are naturally attracted to the catnip and will want to be around it. However, before using this technique, you should test your cat’s response to the herb. Some cats react unfavorably and the goal is to reduce unwanted behavior, not increase it. Regardless of how the cat acts when sniffing catnip, it isn't harmful to it in any way.

Place a catnip plant inside of a birdcage where the cat can get to it but not knock it over. Place the cage in an area of your home where you want the cat to spend more time. This trains the cat to associate happy emotions with the area and it will be less likely to seek comfort from your window screens.

Cover the screen with double sided sticky tape to teach the cat that the screen is undesirable. Cats don’t like sticky paws and will quickly learn that the screen is no place they want to be. This will limit your air flow, but you won’t have to leave the tape there for long before the cat decides that it doesn’t like the screen anymore.

Spray the screen with a cat repellant spray if covering them isn't an option. These sprays leave behind an odor that's typically undetected by humans but offensive to cats. The primary disadvantage of the sprays is that the cat may no longer sit in the window to enjoy the fresh air.

Things You Will Need

Today, no one is surprised by people traveling with their dogs, cats and other pets. And do you know that there is another kind of service that allows pets to travel independently? Of course, they don’t buy tickets and don’t book a taxi themselves... The organization of such a trip is a matter of special Pet Relocation Services. Pet Express is one of companies offering these services. It is a leading pet travel specialist in Sri Lanka. The experienced team of Pet Express will be the national or international travel agent for your beloved pet. Contact them to know more!

@Caitlin Dorsey: Yesterday my moms cat pushed the screen out of the third story window and escaped off the roof. Now none of us can open windows and IM DYING